Guest Post :A Day in my Writing Life by Sarah Dalton

Today I'm delighted to welcome Sarah Dalton, author of White Hart, to my blog. As you read her post, you'll probably guess what attracted me to her book.


A Day in my Writing Life:


Unfortunately I don’t spend my days with a laptop in coffee shop as so often depicted in the movies and if I try to I generally give up – the noise of screaming children, coffee machines and bad slow jazz isn’t usually conducive to productive writing!
But there is an element of freedom which means that a writer has to experiment in order to get the best out of their selves. For me that means working early in the morning. You need to find your routine and stick to it.
Most writers will tell you that they produce their best work about 20-30 minutes into their writing which is why many people advocate free-writing and brainstorming to get yourself into a flow. I don’t tend to do this because once my mind is focussed I’m ready to begin. I like to get up, eat, and then jump straight into it.
Writing is intensive. You write real emotions and that can be draining and I find that you can only fully concentrate for around two hours at a time, and this is where I really love being a writer because then I have a break and watch TV or do some housework (oh, who am I kidding - I watch TV!). Around 11am I make a cup of tea (one of many) and watch True Blood.
Sometimes you have days where you feel like you don’t do any writing at all because putting a novel together isn’t just about creating sentences. It’s also about plotting, editing, proofreading and marketing. They are sometimes the most boring but necessary of tasks – the equivalent of filing in an office job – but they have to be done. You have to check that manuscript for incorrect commas and speech-marks. You have to edit out scenes that don’t add to the plot. And then there are the days where you don’t feel like you’re doing anything at all. I call these my ‘frustrated thinker’ days where I get what’s commonly known as writer’s block. It isn’t writer’s block; it’s another necessary part of being a writer. You need time to think about your work and sometimes that can’t be rushed. When it happens to you try to chill out. Let it happen naturally. Focus on other things until you’ve worked everything out in your head and then move on. The worst thing a writer can do is get too frustrated when you aren’t writing. Have confidence that you will pick up that pen or place a finger on the keyboard again and embrace it.
Writing days can be different, they can be generic and they can feel non-existent. But whatever happens it isn’t like a job in an office. When you step out of your writing den, dungeon, office… whatever it is you call it – you don’t switch off. When you’re a writer you’re a writer 24/7. Everything you watch, hear or experience adds to that little bank in your mind called ‘ideas’. 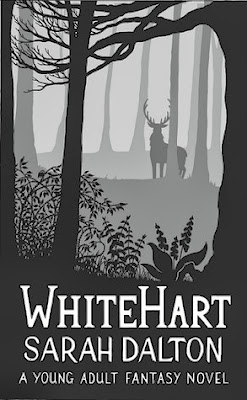 The realm needs magic again, and the the King of Aegunlund has been waiting for the first craft-born girl to marry his son, Prince Casimir.

In Mae’s town of Halts-Walden, the ambitious miller claims his daughter Ellen is craft-born. Mae knows this is a load of hogwash, but she’s glad Ellen will have the unfortunate pleasure of becoming queen instead of her. All she has to do is sit back and wait until Casimir and Ellen are married, then she will finally be free of the threat of her fate. But on that day an event so shocking and terrible occurs that Mae finds herself entering the neighbouring cursed forest on a quest she never thought she’d have to follow.

Join Mae as she rides her white stag through the Waerg Woods with a pampered prince at her heels. She’s out for revenge and nothing, no one, will get in her way.

Sarah grew up in the middle of nowhere in the countryside of Derbyshire and as a result has an over-active imagination. She has been an avid reader for most of her life, taking inspiration from the stories she read as a child, and the novels she devoured as an adult.

She is the author of the popular YA dystopia series 'Blemished' and the gothic novella 'My Daylight Monsters'. Her latest series is called White Hart – a YA fantasy about a girl who hides magical powers from everyone around her. 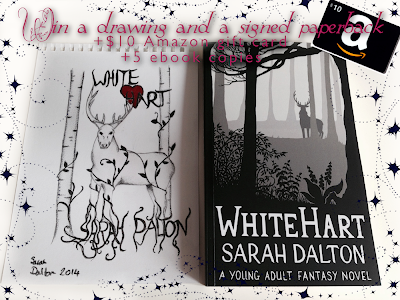 Father and I live on the edge of the gloomy forest; close enough to smell the leaves, hear the rustle of animals, and sense the dangers within. Darkness hangs below the knotted canopy of branches. I stand and watch in awe, following Anta’s hoof-prints. It’s late. The sun sets. The grey of dusk descends over Halts-Walden with the threat of rain in the dark underbelly of clouds. The prince may well be greeted with mud and rain in the morning. The thought makes me feel rather gleeful. I imagine some pampered, puffy prince on the back of a regal horse, riding into the village in search of the red hair of maidens, quaint flowers, and those who bend the knee to him.
“Come in for stew, Mae,” Father says. “You should have a bath, too, if the prince is arriving.”
“I thought the whole point was to make sure the prince wouldn’t want me,” I reply, shooting him a glance.
Father sighs. “That’s true. But this is still a momentous occasion for the village, and you should look the part, or you’ll attract attention. Do you know the last time we had a royal come here?”
I shake my head.
“Well, it was before my time. Your grand-papa talked of it sometimes. King Aldrych the First came when he was still a prince. He thought we were enchanted, because of where we live. I suppose the kings always do.”
We’re under Aldrych the Second’s rule, now, a man I know little about because of how isolated we are. His reputation is one of greed. The only thing I know is that he wants his precious Red Palace to make his gems. Apparently the craft is needed for that. I don’t know how it works. Part of me would love to see the castle, to discover what makes it so special.
“Well, Ellen is craft-born, after all.” I snort. She’s got about as much craft in her as the muck in Farmer Black’s pigpen.
“Are you complaining, Mae? You’ve wanted nothing more than to avoid Ellen’s fate. Ever since…” He trails off.
Ever since I realised I have the magic in me. To finish his sentence, I lift a hand and click with my thumb and index finger. The butterflies that usually hide away between our flowers reveal themselves in the garden. There are dozens of them fluttering through the sky of all colours: red, yellow, blue, patterned with eyes that stare out like rubies. They fly to me and cluster around my hand.
Father shakes his head, but he laughs. “If only your mother could see you.”
A bold butterfly with wings the colour of sapphires lands on my nose, tapping me with its antennae.
“I just wanted to call you,” I say. “There’s no job for now.”
The butterfly leaves my nose sharply, as though in a huff. The others follow, flapping their tiny wings, disappearing back amongst the flowers.
“You shouldn’t call them whenever you feel like it,” Father warns. “Nature doesn’t exist to serve you and your every whim.”
I’ve heard this speech many a time, so I clap my hands together to prevent a long lecture. “Stew it is, then!”
Father puts an arm around my shoulders as we head back to the hut. “Rabbit stew, in fact. With carrots and mint. I need to fatten you up—I can feel your ribs!”
I pat my tunic. “Really?” I am small for my age.
He chuckles as we walk through the doorway. I help him up the stone step. “You’re still growing. Don’t worry, I’m sure you’ll be a few inches taller by your sixteenth birthday.”
I lift his arm from my shoulders, and it drags dark curls in front of my eyes. I push them back behind my ears. “I doubt it.”
“Sit down and eat your meal.” Father points to the table, laid out with a bowl of food. It’s barely enough for the two of us. “Tomorrow will be a big day. We’ll see the prince, and when he takes Ellen away, we’ll never have to worry again about you being sent to the Red Palace.”
I like the sound of that. As I shovel down the rabbit stew, my shoulders lighten. For years we’ve worried about my powers. We know little about craft and the craft-born, except that the magic within me seems to allow me to call on nature. I don’t know why it makes me powerful or how it would benefit the realm, I just know that I don’t want to be a princess and I never have. I can’t think of anything worse than flouncing about in fancy dresses, cooped up in the Red Palace forever, forced into marrying someone I don’t even know. I certainly don’t want to use my powers to help the king become even richer.
But there is something in me that longs to find out more about the powers within me. Sometimes I fantasise about disappearing from Halts-Walden and travelling Aegunlund in search of answers. I want to be in the woods with the birds and the butterflies. I want to climb trees and ride Anta ’til my arse-cheeks are sore. I don’t know why I’m craft-born, and I don’t really care. All I know is whatever the reason, it has to be more than sitting pretty on a throne. There must be more to life. There has to be freedom and adventure in this world. I want to find it.