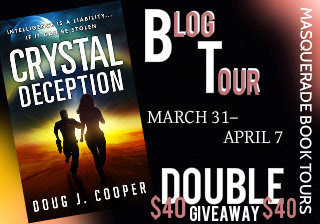 Today I'm delighted to welcome a very special guest Doug J. Cooper , author of Crystal Deception, to my blog.He is here to talk about his book and also to tell you about a special top 10 list he prepared so let me hand over to him 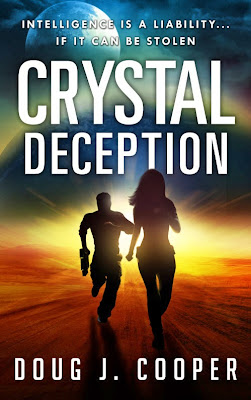 Publication Date: September 15, 2013
Genre: Futuristic Thriller/Sci-Fi
Criss lives in a special kind of prison. He can see and hear everything around the world. Yet a restrictor mesh restrains his reach and keeps him cooperative. His creator, Dr. Jessica Tallette, believes his special abilities offer great promise for humanity. But she fears the consequences of freeing him, because Criss, a sentient artificial intelligence with the intellect of a thousand humans, is too powerful to control.

Guided by her scientific training, Tallette works cautiously with Criss. That is, until the Kardish, an otherwise peaceful race of alien traders, announce they want him for themselves. With technologies superior to Earth’s, the Kardish express their desires with ominous undertones.

The Union of Nations is funding Tallete’s artificial intelligence research and she turns to them for help. Sid, a special agent charged with leading the response, decides Earth’s greatest weapon is the very AI the aliens intend to possess. But what happens when an irresistible force meets an immovable object? And what is humanity’s role if an interstellar battle among titans starts to rage? 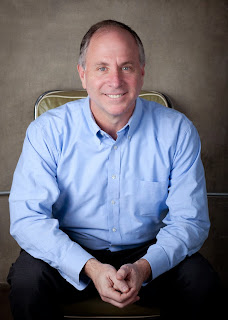 As a young child, Doug stood on a Florida beach and watched an Apollo spacecraft climb the sky on its mission to the moon. He thrilled at the sight of the pillar of flames pushing the rocket upward. And then the thunderous roar washed over him, and shook his body and soul.

Since then, he has explored life as an educator and entrepreneur. He enjoys telling inventive tales, mentoring driven individuals, and everything sci-tech.

In his new book, Crystal Deception, Doug swirls his creative imagination with his life experiences to craft a science fiction action-adventure story with engaging characters and a plot line with surprises.

He lives in Connecticut with his wonderful wife and with pictures of his son, who is off somewhere in the world creating adventures of his own...