Book Review : The Evolution of Gods: The Scientific Origin of Divinity and Religions by Dr. Ajay Kansal 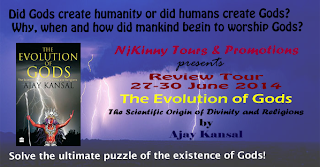 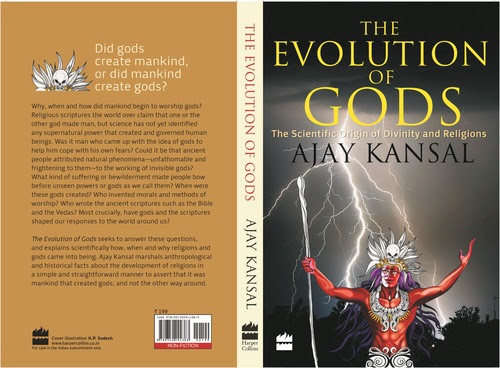 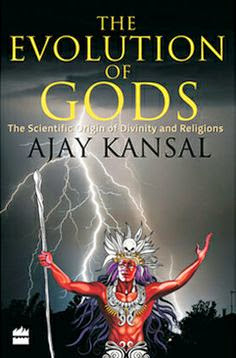 Did gods create humanity or did humans create gods?
Did gods create mankind, or did mankind create gods? Why, when and how did mankind begin to worship gods?
Religious scriptures the world over claim that one or the other god made all plants and animals, but science has not yet identified any supernatural power that created and governed living beings.
Was it man who came up with the idea of gods to help him cope with his own fears?
Could it be that ancient people attributed natural phenomena-unfathomable and frightening to them-to the working of invisible gods?
What kind of sufferings or fears made people bow before unseen powers or gods as we call them? When were these gods created?
Who invented morals and methods of worship?
Who wrote the ancient scriptures such as the Bible and the Vedas?
Most crucially, have gods and the scriptures shaped our responses to the world around us?
The Evolution of Gods seeks to answer these questions, and explains scientifically how, when and why religions and gods came into being. Ajay Kansal marshals anthropological and historical facts about the development of religions in a simple and straight forward manner to assert that it was mankind that created gods, and not the other way around.

The apostles said to the Lord, “Increase our faith!” And the Lord said, “If you had faith like a grain of mustard seed, you could say to this mulberry tree, ‘Be uprooted and planted in the sea,’ and it would obey you. (Luke 17:5)

The Evolution of Gods: The Scientific Origin of Divinity And Religions is a book for atheists to sharpen their weapons and also a one for believers to enrich their faith in the Almighty. Dr Kansal, an ardent proponent of atheism who challenges the very existence of God and denies rationality of religions has brought out the best in me to consolidate my faith in Lord RAMA. Prior to this I never reflected back upon my religion with such a critical mindset, but the stir this book has created in my mind has led me to find scientific basis of my beliefs. The result is my faith now stands on concrete pillars which I guess wouldn’t be swayed by the strongest of the torpedoes.


What was good
The author takes little more than 200 pages to deny thousands of years of wisdom and skillfully dismembers God to a mere fragment of Human imagination.


'Man could perceive some unseen, unheard, untouchable, non-aromatic divine power only after the evolution of his imagination.'

The book written in a chronological fashion searches the history and existence of Gods through the scientific evolution of humans. It suggests that gods were created so that humans could explain the existence of things that were beyond their grasp like the lightning and rain, the day and night, the sun and the wind. Sometimes these uncontrollable powers were heralded as a boon and sometimes they were a bane. Hence they started to call them gods and prayers were started to appease them and to be on their good sides.


At some point in time—we do not know exactly when this happened—people in various far-flung parts of the world developed an instinct. Whenever people encountered some power beyond their control that could harm or help them, they began to worship that power.

The narrative skills of Dr kansal is quite strong, similar to his research. he keeps you spell bound and at every juncture he etches a clear picture of the facts with lucidity and argues his way that newer Gods were created to meet the newer challenges of mankind.


history demonstrates that whenever humankind faced a new challenge, priests invented a more useful deity and consigned the older one to oblivion.

The language of the book is very simple and the logic is quite undeniable. all can understand and relate to the perspectives of the author. The real beauty of the book is underlain in the fact that even though the author has argued the existence of God and given his explanations of the various myths he doesn’t try to burden the reader with his philosophy.


This book is an effort to light a candle in the darkest corner of Human consciousness.

The book contain 3 separate chapters on Hinduism, Judaism and Christianity explaining the way these religions came into being and how they developed throughout the history. These chapters are quite resourceful and informative about the different aspects of religion and beliefs. And I thoroughly enjoyed looking at different aspects of God as a whole. It is during these chapters author explains the existence of moral codes and various religious texts. Also during these chapters author has made a feeble attempt of comparing these religions and giving his opinion about their truth and existence. he tells how we have deviated from the original basics of these religion teachings.


The core teaching of jesus said : ‘Love all do not kill even animals’. His last words for the people crucifying him read : ‘Father for they know not what the do’.Thus basic teaching of Jesus was non violence and forgiveness . ……….. Many of his followers fought countless wars just to establish their dominance.

The author also describes how the presence of religions brought the scientific advancements to stagnancy. He launches an offence against the priests and their teachings, for the Dark Ages.


"The greatest obstacle to discovery was not ignorance, it was the illusion of knowledge",

the target audience is very skill fully chosen- the younger generation, the ones who are not extremists and is ready to have an open mind towards different points. The main aim of this book seems to be to achieve a state of religious harmony and respect, to avoid the conflicts on religious grounds and to train the next gen towards a better future. The ill practices still going on in the name of religion are well highlighted and depicted in an unbiased way.


"The knowledge about the evolution of gods may vaccinate youths against the disease of religious extremism."

What went wrong
The book is too ambitious, it’s written in a one track perspective i.e. for a given myth or practice he gives only a single explanation. Needlessly to say that this explanation is ruthlessly aimed to prove his point. his opinions inadvertently changes to judgments and I believe that a few might hurt the sentiments of a not so atheist reader.


Almost all ancient people of the world developed many funny religious concepts: Yajna was one of the funniest concepts humanity could fathom and continue too

These kind of comments on one’s religion and belief are just undeniably over the top, Yajna is one of the most auspicious thing in Hinduism and the author just refers to it as a bane of the society.
Though mostly the author has been cynical about Hinduism he doesn’t spare the other religions when he writes..
`

God did nothing to save His son Jesus from the painful death, but shook the earth and the sky later.'

At places even certain facts were modified for e.g while talking about Buddhism Quoting Epicurus was unnecessary and uncalled for. it was only done to deviate the belief of the reader. his words are presented in wrong light, Epicurus was not an atheist nether did he denied the presence of gods, He was just one of the first to believe that mankind shall not fear God, He regularly admitted women and slaves into his school and was one of the first Greeks to break free from the god-fearing and god-worshiping tradition common at that time, even while affirming that religious activities are useful as a way to contemplate the gods and to use them as an example of the pleasant life. all this was not there in the book. The only thing present was his words that were presented in such a way that it gives an impression that Epicurus denied the religion 2400 years ago

These words of Epicurus were the starting words of his teachings that pleasure and pain are the measures of what is good and evil; death is the end of both body and soul and should therefore not be feared; the gods neither reward nor punish humans; the universe is infinite and eternal; and events in the world are ultimately based on the motions and interactions of atoms moving in empty space. These Were presented in a completely different way which I think is too ambitious. The author went a bit tad too far too prove his point, bending the teachings of a well known scholar.
Lastly I would point out that though the book was supposed to be ‘The Scientific Origin of Divinity and Religions’ but the Scientific aspect of religion was completely overlooked. I have limited knowledge of other religion so I would like to keep my point in Hinduism.
In his book Ramcharitramanas (Ball kand shlok 56), an Indian Epic by Tulsidas, it is mentioned about the presence of multiversity and How lord created them and recedes in each of them at the same time everyone have their existence in each of this parallel dimension but with different perspective and appearances. This concept is similar to the new emerging scientific concept of probability, Time and Multiverse
In bal kand shlok 100 Tulsidas have also explained how it was possible for Ganesha to be worshiped before his birth because time is omnipotent he lives in other time period this is in accordance with the modern concept of Time as a dimension
The Vishnu Puran explains Dashavtar First Matsya(Fish), Kurma the tortoise, Varaha the boar, Narasimha the half-man/half-beast, Vamana the dwarf, Parashurama, Rama, Krishna. If seen scientifically shows how Mankind evolved from fishes to amphibians to reptiles then mammals in mammals first beat then half beast (apes) then a dwarf after that Nomads (Parashurama), Ideal King (Rama) to a clever King (Krishna).
There’s a long list of such examples which I don’t want to go in.
Such facts were skillfully concealed for they would have against authors point so were never mentioned
Let me end my review by quoting Vipin Behari Goyal, ‘Nietzsche said, “Faith is a delusion, but then I never had faith in Nietzche”’ .
I recommend this book to everyone and suggest them to come to their own conclusion after reading it

As per my rating 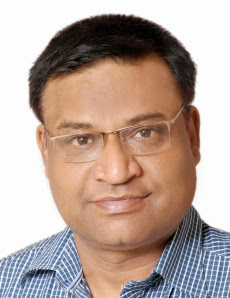 Dr Ajay Kansal is a professor and consultant pathologist. It was during his medical practice that he encountered human suffering in a big way that made him question the concept of Gods and drove him to write this book.
The Evolution of Gods

is his first book and the only book written by an Indian author on the concept of the existence of God which talks of all religions and is not based on any one particular form of it. His next work is a romance which is currently in progress.