Guest Post : THE HAUNT OF THIRTEEN CURVES by Jeanne Arnold


Today I'm delighted to welcome Jeanne Arnold, author of The Haunt of Thirteen Curves, to my blog. As you read her post, you'll probably guess what attracted me to her book


THE HAUNT OF THIRTEEN CURVES

Guest Post by Jeanne Arnold
Hi there,
I feel I must warn you. If you survive the heart-pounding drive up the haunted thirteen curves, avoiding the clutches of roving brides and armed recluses, you better be ready for what awaits at the top.
I found out the hard way when I demanded my sister tell me where she disappeared to for days on end. I wasn’t willing to back down until she shared her secret escape. Little did I know she would actually drag me up the stomach-churning curves, blindfolded, with her boyfriend at the wheel, driving a million miles an hour. What they revealed to me in the winter of my seventeenth year…transformed me forever.
Surviving the treacherous drive to the abandoned armory was merely the start of my death-defying adventure. Navigating Elias Hawk’s sneaky manipulation became my task when I was introduced to the castle in the sky and its unique cast of dwellers. The more Elias evaded my questions about the place he called home, the more I knew he was covering up something big. The striking boy drove me wild with his clever smokescreens and well-timed kisses. Until I stumbled on his nemesis…a waiflike, ghost-bride waiting to collect me on the thirteen curves.
Trust me when I tell you to hold on tight. You’ll need more than a seatbelt to ride this ride.Consider yourself warned.
Sincerely,
Marcella Jackoby of Pennywright

The Haunt of Thirteen Curves by Jeanne Arnold 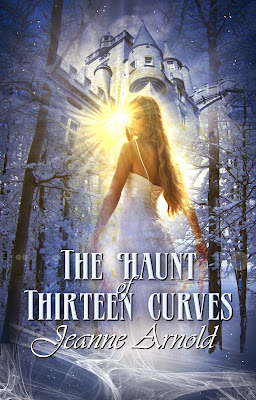 "In the armory, things can be convincing and impossible. Just like Elias."

Seventeen-year-old Marcella Jackoby’s bleak reality is altered when she encounters the apparition of a grieving bride wandering the deadly thirteen curves outside of Pennywright. Intent on capturing Marcella, the bride seeks to populate a mythical castle disguised as an abandoned armory, where young guests tirelessly battle an alliance of recluses in order to live with the promise of eternal youth and love.

Unaware of Elias Hawk’s efforts to safeguard her from untimely death, and in spite of the fact that he and the kids residing at the armory are not what they appear to be, Marcella falls for this enigmatic young man. As she uncovers Elias’s century-old secret, Marcella’s home life crumbles and an encounter with a roughneck adversary threatens her budding relationship and the existence of the armory’s residents, unintentionally leading Marcella to ignite war between the worlds, endangering the couple’s future in a shocking twist of fate. 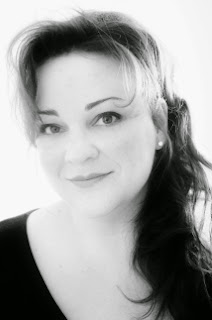 Jeanne Arnold is an author of young adult romance. At a young age she found her creative outlet in art, and for years her fictional characters came to life in drawings and paintings, until they demanded a voice. Now they grace the pages of her stories. Jeanne shares her time with her fictional teenage counterparts and her human family in Central New York. STUBBORN is available in ebook, print and audiobook at all major online retailers. Look for THE HAUNT OF THIRTEEN CURVES in July 2014 and JUST AS STUBBORN, the second installment in the STUBBORN series, in January 2015.