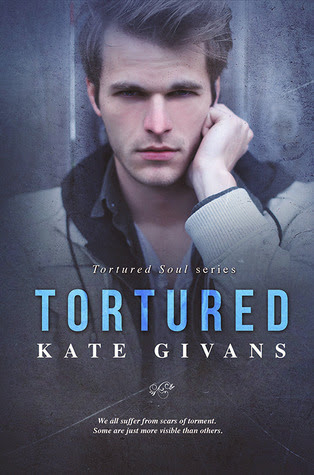 A contemporary romantic drama about loss, healing, and love's ability to reach beyond scars and secrets, no matter how deep or hidden.

WARNING: This book is intended for 18+ readers ONLY. Potentially triggering content and concepts in books to follow.

More than a year after the death of his best friend, Josh is still tormented by the past. Everything changes when free-spirited Willow barges into his life. She challenges him, helps him feel something other than the overwhelming pain, sadness, and anger.

Underneath that carefree spirit, Willow is elusive and secretive. Josh believes she may be fighting a few demons of her own, but he harder he tries to uncover the truth, the more she pushes him away.

Can Josh get her to open up before it’s too late? Or will he discover that some secrets are better left untold?

Quirky, clumsy, and always a little off-key, Kate Givans has always loved books and the words contained within. Now that she's writing the stories, she's filling them with broken characters, angst, and even a few of those happily-ever-afters that seem to evade us in real life.

When not writing, this wife and mother of five can be found guzzling coffee, day-dreaming, dancing for no reason at all, playing with the voices in her head, watching her favorite shows (Originals, Grey's, OUAT, The Following), listening to music, and reminding herself to "breathe."

“Fourteen into the six, into the fifteen, corner pocket,” Willow said, lining up for the shot, her gathered fans silent as she moved the cue stick back and forth. No one made combination shots like that, but I had no doubt in my mind she’d make her mark.
I was toast.
A few gasps came from behind me when the loud smack of her stick hitting the cue ball came. Fourteen sped right into the six and then veered off to the left, just a little before hitting fifteen. Then came the thunk of fifteen hitting the pocket.
Like I said, toast.
Exhaling as I ran a hand through my hair, I looked over the remaining balls. If I could land the six and the two in one shot, I might be able to save my dignity. Unfortunately, because they were each at opposite ends of the table, my odds weren’t looking very good.
“Wanna call game?” she asked with a wink.
Oh, now she was getting cocky.
I gritted my teeth as the flush spread through my cheeks. “Nah, I got this.” If I could just line up right…
I squatted down, trying to find the right angle. Whispers erupted around me, giving what had started out as a friendly game more of a competitive edge. It might sound silly, being so embarrassed, but these were people I’d known my whole life. And in towns like this, stories never died – especially ones that included getting your ass kicked by your girlfriend at pool.
The shot seemed impossible, but I wasn’t backing out of game early. I stood, lined up, reared my cue stick back a couple of times and hoped for the best. I held my breath as the cue ball made its way to the six, landing it in the corner pocket. It looked like it just might clear the eight ball for a second, but I’d cut too far to the right. The game ended with one last thunk – eight ball in the side pocket.
I blew out the breath I’d been holding and put my cue back in the holder. When I turned around, Willow was standing right in front of me. “Good game, Pennington. Do I get a prize for winning?”
“No,” I responded, crossing my arms over my chest. I was feigning for annoyed – which I kind of was – but mostly, I was still a little surprised by her mad pool skills.
She gave me the most adorable pout. I couldn’t fight the grin spreading on my face, no matter how made I wanted to be. “Oh, alright. If you insist,” I said, taking her cue stick to place it against the wall. With every ounce of heat I could muster, I wrapped my arms around her waist, and in one swift move, I dipped her and gave her a kiss that pulled hoots and hollers from the crowd.
“Wow,” she panted, hand on her chest, when I placed her upright again. “I should kick your ass more often.”
I closed my eyes and leaned my forehead against hers, taking a moment to just enjoy her sugary sent. “Now, now. Don’t go wounding a man’s pride all the time,” I whispered, the heat of her hands against the back of my neck doing unimaginable things to me.
Even though I hadn’t known her but a few months, I’d never dated anyone that seemed to know the full depths of my heart and soul. Corny as it sounded, I couldn’t shake this sense that I’d found my other half – the piece that fit into the jagged edges that no one else had ever been able to fill. And I didn’t even know her last name.