Gurgaon the hell on earth

Eons ago, a council of Devas assembled in Svargloka. The issue at hand was something serious, because even Brahma was present, seated as he was at the head of the council, flanked on either side by Lords Vishnu and Shiva. Presently, Indradev rose and announced the agenda of the meeting. He said “All of us know that Manushya has lost the true path, Dharma is getting destroyed and yet Manushya is doing nothing about preserving and propagating Dharma. All Dev-ganas are aware that we had formed a special Investigation team (SIT) to get to the bottom of this issue. I now invite the SIT Chief, His lordship, Agnidev, to present the findings of the investigation. AgniDev, now took the center stage. In a blazing voice, he announced “Dharma is getting destroyed because Manushya has forgotten that his Karma in the present life will lead him to Svarga or Narka. He has forgotten that there are powers beyond his reach, powers beyond his comprehension that still exist in the world. My dear Deva-ganas, there is only one way to bring manushya back to the path of Dharma, and that is to remind him that Narka exists and that unless he mends his way, he will suffer in Narka for eternity.” All Deva-ganas stood up and applauded Agnidev and the SIT for this recommendation. Now, Brahma-Dev rose and in a booming voice announced “I curse that the manushya jaati will see Narka everyday for the rest of their life, so that they understand the need to stay on the path of Dharma”

And thus was born the city of Gurgaon, or more specifically, the highway that leads from Delhi to Gurgaon. There are no words in the English dictionary to describe the range of emotions that one feels while driving on this swanky, yet perennially jammed highway as millions of commuters, spend a good part of their morning trying to weave a path that will lead them to the Narka called Gurgaon at the earliest. Gurgaon (and the NH8 that leads to it) are much worse than Narka to be honest. Even Narka is governed by a set of laws. But here in Gurgaon, no laws apply. Each man is on his own, or worse still at the mercy of the Rakshasas that go by the name of Gurgaon Traffic police.

The Rakshasa roopi-Gurgaon Traffic police play the part of ensuring that the quality of Narka continues to deteriorate every single day. One day, they block U turns, on other days, they set up roadblocks, on another day, they stop vehicles, in the middle of the road for checking documents and when all else fails, they grant the permission to screen MSG on a weekday, thus ensuring that the sinful Manushya-jaati suffers every single second and realizes that Dharma is the only true path. But that is not all, In Brahma’s curse, the Asuras also found an opportunity to harass the Manushya jaati. Thus, every single day, you will find fellow drivers, who honk incessantly, who park their vehicles on the highway, who jump lanes, who overspeed, who swear and shout, and as if all this was not enough, there are Mahishasur-types, who roll down their windows and play Punjabi hip-hop at full volume. Surely, this ought to ensure that Manushya jaati stays on the right track.

But that is not all, Indra-Dev as the convenor of the Dev-lok, took it upon himself to ensure that a back up plan to punish the Manushya jaati stays in place, if all else fails (The Rakshasas and Asuras are notoriously unreliable beings). Hence, Indra Dev ensures that it rains like there is no tomorrow in Gurgaon and at the same time, he conspires with Varun-Dev to ensure that he clogs the city, effectively submerging it, its inhabitants and the God-forsaken travellers to this city. In such a situation, vehicles are reduced to becoming boatsas they navigate through the submerged city, with potholes converted into subterranean crypts that lead to Patala Loka and whirlpools that frequently devour deviant manushyas.

And yet, the Manushyas continue to suffer with fortitude and courage. They know that suffering is their lot. They know that the Devas up above meant them to suffer so that they are never led astray from Dharma. Every day, millions of Manushya-ganas start from their abodes at an hour, when even the Devas rest in their loka, only to trudge through the rains, the traffic, the potholes, the Rakshasas and the Asuras to reach their workplaces, drained of all energy, only to encounter Ravanas and other Daityas in their offices that make their miserable lives intolerable.

Because thus was decreed the fate of manushyas.

* This article was send to me by an anonymous mail 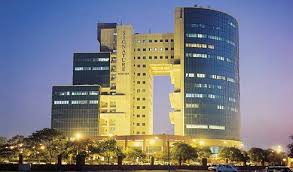