Guest Post: Behind the Characters by M. M. John 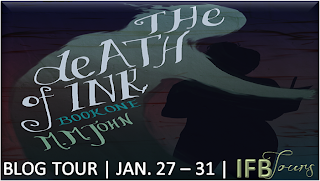 
Today I'm delighted to welcome M. M. John, author of The Death of Ink, to my blog. As you read his post, you'll probably guess what attracted me to his book.


I wanted to write a story about writing. I wanted to write a story about young love. I came up with the idea of the The Death of Ink after reading a writing prompt about someone stealing a story idea.
The Characters:
Originally, I based the guy and the girl on two people I knew from high school. The girl was very smart, an A+ student who everyone hated for some reason. The boy was the more popular out of the two, arrogant, although thoughtful at times, and an enormous flirt. In history class I watched him flirt with the girl all the time, only to be constantly ignored. It didn’t even seem like she was aware of his infatuation. To my knowledge, they never dated although they were always amicable to each other. I thought it was an interesting dynamic. It got the wheels turning in my brain.
I started to get clearer ideas for each of my characters. I decided I would make each character symbolic of the writing process. Devon is more to-the-book, follow-the-rules kind of guy when it comes to writing. Paige represents the passion and raw creativity behind writing. I wanted to show how all of these traits, though they could at times clash, must work in synergy in narrative fiction.
Devon Jayden Connors
Devon has an interesting story, which the reader will get to see a little of in the book. He’s a kid from Michigan who moved to Lake County, Florida on the heels of a personal tragedy. He is eighteen years old, good-looking and a wide receiver at Bass Towers high school. He’s got the world in his palms until Paige Langley unwittingly stumbles upon a binder housing his darkest secrets.
This binder called The Collection is not actually his work, but the doings of a dead girl who haunts him every night.
Words I would use to describe Devon it would be reserved, clever and unpredictable. I didn’t want to make him brooding (as in a personality type, he does brood at times) and I didn’t want to make him a jerk or a womanizer. I put him in a committed relationship with another athlete (Cristina, a track-and-field runner) and gave him a pretty much mellow personality.
I have been told many times that Devon is a very unique. I based Devon’s personality a lot on my older brother. Some of his experiences, as far as writing, and why he does it, reflect my own. Writing some of his past life was very difficult for me for this reason.
Paige Langley
Paige’s story is more straight to the point and uncomplicated. She’s fifteen years old when her school closes down and she transfers to Bass Towers. Noting her proficiency in math, she is recommended for an aptitude test, which she passes and is placed in senior classes. She accidentally picks up Devon’s binder after meeting him in a book store.
Some would say Paige seeks attention, which would be incorrect. She already has attention. She is fifteen and a high school senior, her father is known around the neighborhood as being a cokehead and a deadbeat, and people expect her to get knocked-up and drop-out just like her big sister.
Paige wants the right kind of attention. The kind of attention her favorite author, and best-selling novelist, Linda Davis has. This is why when Linda Davis opens a writing contest; Paige sees it as her only chance to prove herself. And when Devon's binder of perfectly written stories basically falls in her lap, it only seems logical to Paige to cheat.
Influential Characters:
Since she was five, because of various circumstances, Paige has lived with her grandmother. Her grandmother is very strict on the girl. Paige is not, and I did not want her to be, one of those types who hate her parents (in this case guardian). Nor does she ‘find herself’ or ‘realize the restrictions in her life’ after she meets Devon and decides to rebel. I feel like that theme, though widely celebrated, this is overdone. Good girl gone bad with the help of an edgy, of course, male and turns against her parents. For one, girls can come to self-actualization and autonomy without the help or affections of a male counterpart.
Paige actually respects her grandmother and becomes defensive whenever someone says her grandmother is too strict. There is also another, deeper, part of that perspective. Her grandmother took her in when her father abandoned her after she was born. This early abandonment made Paige feel inadequate. In some ways, Paige feels grateful to, and as though she owes, her grandmother and wants to be the perfect granddaughter in order to prove her worth. This is hardly a healthy disposition, and something I work on in her in later books.
The greatest influence in Devon’s life belongs to two characters. The first is his twin sister, Garland, or simply Lyn. After a she experiences a life-altering event, Devon begins to create stories, mainly to comfort and amuse her. Since their father is a minister they spent a significant part of their lives presenting themselves as ‘perfect’ to the public, though not necessarily to their high school friends.
The second person is Olivia, the girl who died in Michigan before his family left the state. She was in some ways his muse, and still is, as she haunts him and forces him to write. As she starts to get greater and greater control of his life, Devon finds out that this once controllable nightmare might have an ending that means serious consequences for him and his family.

The Death of Ink 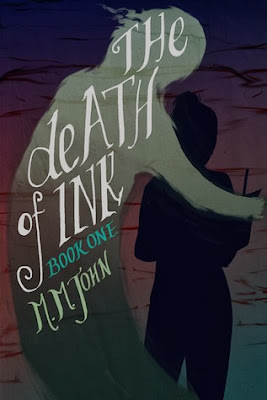 Series: The Death of Ink #1 Release date: January 17th 2014 Paige Langley’s life has always revolved around good grades and escaping her less than ideal home life…but once she meets Devon Connors, her life drastically changes. Although, they share an instant attraction, Devon’s concealing a dark past. And an even darker secret…there’s a dead girl haunting him nightly. Resolute to win the school’s writing contest, Paige will do just about anything to achieve her goals. So after she finds a binder containing information on a past murder and the illegal activities of the students, she believes the stories are fictional and the perfect way to win the contest. But the owner of the manuscript, Devon Connors, has other plans. To keep Paige from exposing his secrets, Devon befriends her and even offers to help her write a winning story for the contest. The chemistry between Paige and Devon is undeniable, but Paige doesn’t know if she can trust him. The deeper she digs into the dark underbelly of their high school, the more she realizes that some secrets are better left buried.

College student by day, clandestine writer by night, M. M. John lives in a Florida town full of ghosts, mysteries and secrets. The Death of Ink is her first novel.